A Herd of Turtles

I can’t believe it’s been a month since I left for the Games. It feels like it was only a couple weeks ago that we were on the plane coming home with a bunch of the Rogue equipment guys and 2010 champ, GRAHAM HOLMBERG. Boyfriend saw him, I didn’t. Though we did our best to stalk him.

I wish I could say that I’ve been wodding a lot, but ever since I got back from California and even before then, I’ve had way too many things go wrong that have prevented me from entering the box.

July 19: I hurt my back moving apartments. It took three weeks for my back to stop being so angry. RockSauce, RockTape, regular ice and chiropractor visits and rest made me go stir crazy but my back got better, so I was OK with it.

August 19: I got a cyst on my left ovary while rowing a 5K. This definitely was a monkey wrench thrown into the mix. I felt pain during the Monday WOD that week but thought it was general female issues until Friday night when my toes were curling in pain and we were headed to the ER. A prescription for Percocet later and we were on our way. I was tender for a good week. The cyst is also messing with my weight. I’m way heavier than I have been in months and I have to assume it’s because of the cyst. I just want it to go away and stop messing with my body.

Now that I’m feeling better, it’s time to get back to my regularly schedule WOD life. Monday was a doozy for one who hasn’t wodded regularly in weeks. It was also about 95 degrees outside, 110 in the box (I swear that thermostat is broken. It always says its 90 degrees in the box. NOT TRUE). 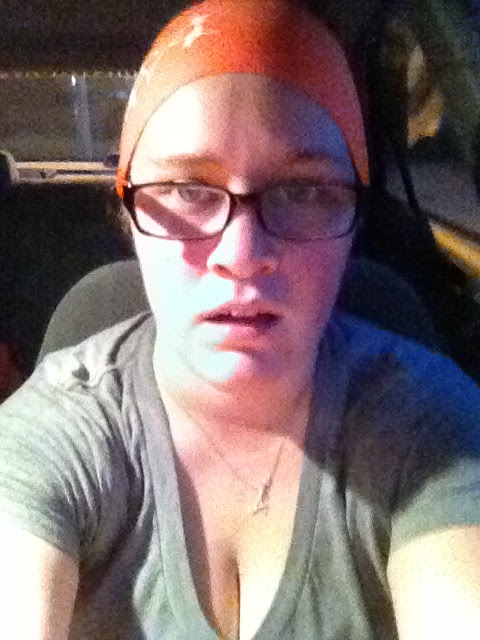 The burpees were so hard and the snatches killed my already aching shoulders and forearms. I pussed out on the wall balls (6 pounds) and only did 45 pounds for the snatches and cleans (my clean is 95 pounds. I muscled those suckers up). The mountain climbers are so awkward for me. I jiggled a lot. I knew there would be a lot of hardship during this WOD so I did everything I could to make it a little more bearable. I was still dripping in sweat when I finished.

I ran during that WOD. I figured 150m was the best time to do it because it would be short and couldn’t possibly aggravate my achilles enough. I took it extremely slow, to the point where I could actually breathe and carry on a joking conversation with the coach while I ran back in. He was proud, to say the least.

The rest of the classes had a 25 minute time cap. I was in the 6:30 class so we didn’t have a cap and I couldn’t (read: Wouldn’t) not finish and/or stop at 25 minutes. Robb told me to do so but I told him ‘that’s not how I operate’ and he continued to cheer me on through the whole thing. 25 minutes came and went and I was working on the snatches. I finished in 36:46 and collapsed on the mat for an unknown amount of time. I couldn’t properly grip things.

I know you’re supposed to leave your ego at the door but I don’t feel like I’ve done enough unless I actually finish the workout. I can’t DNF. It’s simply not in my nature to not finish.

I stood up when Robb was kicking us out at the end of the night and he gave me a congratulatory hug because he knew I hadn’t wodded in two weeks and I haven’t run in 7 months.

My favorite part of the night was exclaiming to boyfriend that I had run. He had proud.

I then drove to pick n save and picked up a rack of already-cooked ribs, some potato salad and some fresh fruit. I ate dinner at 9 and it was amazing, if not paleo.

I woke up the next morning feeling pretty good but DOMS hit pretty quickly by the afternoon. It hurt to sit, to fully extend my arms and to bend at the waist. It even hurt to walk and laugh.

Sweet potatoes were my savior this week. I had some fries last night as a snack because I’d had dinner at 5 and it was this teeny tiny little salad with nothing on it so I was famished. I’m feeling better, though I didn’t think I’d be able to make it through Wednesday. Better start slowly, in my opinion. I’ll be at Friday night, though!

Next post is going to be recipe-rich, I think. I make chili every week and I’m going to be making some awesome cookies on Labor day. I hope you all have a great and long weekend. I’ll be knitting, baking and enjoying every second of my day off! There will likely be a WOD in there, too.