Not Enough Caffeine in the World

Who knew that roasted, salted almonds could look like this all of a sudden when you go to open the bag to enjoy some lovely almonds when you’re falling asleep at your desk? 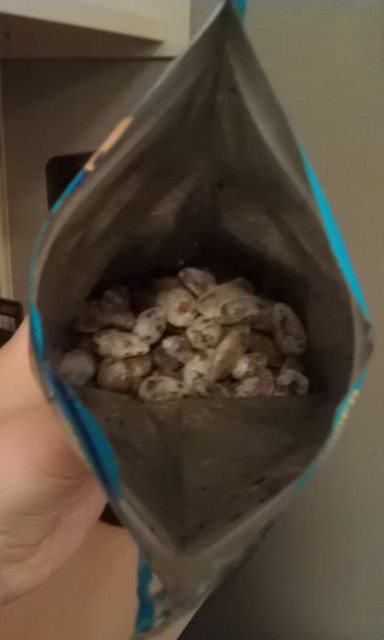 Who knew that a person who was in dire need of said almonds because she may or may not be extremely exhausted, go apeshit upon realizing that said almonds cannot be consumed without throwing up?

I guess this is what I get for not sleeping enough over the last week and a half. What a crappy way to start my week.

I shall make up for it with Tomato Basil soup with chorizo sausage cooked in. It has lots of spice and zing to it and it’s delicious. I made a chorizo-laced chicken noodle soup for boyfriend too and I imagine he’ll be diving in within the next hour or so. I love leftovers. In fact, I think I’ll go and purchase more of this soup and chorizo because it’ll be easy to live off it for the next week until I get paid. 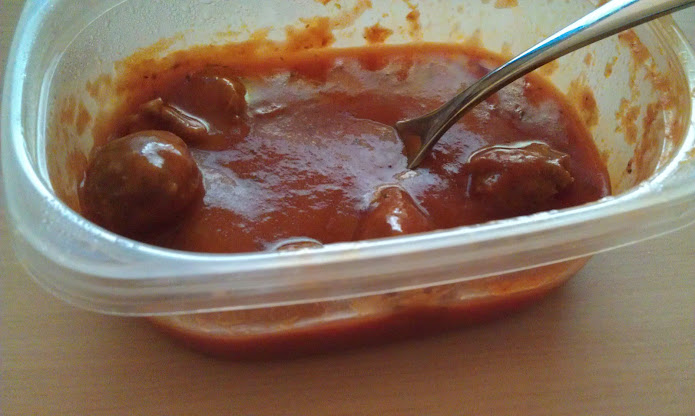 Mind the tupperware. May it be noted that 10 seconds later, this container was emptied and I practically licked the thing clean. omnomnom

For those who want to know, the almonds are probably about a year old. It’s understandable that they would commit almond-cide, but it doesn’t make me any less sad for their passing.

The soups are Progresso Tomato Basil and Chicken Noodle. I got a pound of chorizo sausages from the meat section and, after removing the intestinal skin from the sausages, dropped 2.5 sausages worth of little meatballs into each of the soups where they happily bubbled away cooking the sausages to perfection. They let go of their spicy oils and flavored the soups with just enough zing to really make you think about what you’re eating.

I cannot wait until November 17 when this Lurong challenge is over. Seriously. I want chocolate so bad. And gatorade and greek frozen yogurt occasionally. And all of these other things that mean my stomach doesn’t go haywire whenever I cheat and have a little bit of gluten or dairy or sugar. I get so sick whenever I eat these things lately and it shouldn’t be like that. On Paleo I should still be able to cheat and not be in pain.

I’m still losing weight so Paleo and CrossFit together are still working for me, and I’m sure after this challenge is over and I’m still decently strict and can be more myself it’ll be working just the same, but the fact that I can’t even made banana bread and Paleo cookies is killing me. Baking powder and soda are naturally occurring items, let me bake, dammit!

OK now I know the coffee has kicked in…

I’ve been doing pretty good with Paleo cooking though– this challenge has forced me to get more creative more often when it comes to mixing up the dinners I made for me and Boyfriend, and I am always trying to push the Paleo on other people. When Boyfriend and I went up north with his friends and family, I planned dinner for Friday night and wanted to make something hearty and warming as it was rather cold for the whole weekend. I  made up some sweet potato and chorizo soup from Jamie Oliver as it was one of like, three recipes in an entire book that I could make Paleo. That’s not true, almost all of them could be made Paleo, I just don’t have the time or care to make them that way so if they’re already written, I’m happy to cook.

What I love about Paleo soups is that they’re not like your average broth soups (though there’s plenty of those!) but it’s about the hearty stuff– it’s a meal in and of itself and, if you’re a bread or dairy eater, it works perfectly with a french baguette or a dollop of sour cream.

To be clear, I did a double batch for this soup as I knew there were going to be a ton of people and I wanted everyone to be able to go back for more if they wanted.

The soup is rife with veg of celery, carrot, garlic, onion and 1.5 pounds of sweet potatoes for a single batch, but I prefer the double which calls for 3.5 pounds. I did a mixture of vegetable and chicken broth (on accident, but happily) and there was a pound of chorizo links that I removed the skin and broke up for cooking. The chorizo lets go of some of its heat and spices so you get that delicious red oil on the top of the stock but that’s where all the deliciousness is.

The recipe calls for chile pepper, which I omitted as there was a question of ‘spice’ but I did add a little bit extra curry powder to make it a little of a warm, almost Indian-tasting recipe. My apartment smelled like Indian Buffet while I was cooking and I loved it.

Once everything is all put together and it’s cooked for about 10 minutes, we put it in the blender in batches (I don’t have an immersion blender…yet) and it got smooth and creamy and thick and delicious and I couldn’t help putting my spoon in it and eating already. It’s blended to the point where you don’t get big chunks of the chorizo but if you wanted to have chunks, remove the chorizo before adding the veg to the stock and then add them back before serving. I think this soup is perfect smooth, though so it’s not necessary to take the pieces out.

We packed up the pot itself and put it in the cooler and headed out for Crivitz and the pot was still warm by the time we got there four hours later, just in time for dinner. I dove in hungrily and it was warm and inviting and lovely. Bread eaters eagerly added bread to their plates and someone grabbed salt and pepper (I added very little to the veg) but it was absolutely perfect as it was. Boyfriend went back for seconds and my bowl was scraped clean. There was a single serving at the end of the night and everyone liked it, I think.

Tonight I’m making more for myself to feed…well…me for the next week or so. It’s getting really cold outside and I don’t like to turn on my heat so I think some soup will warm me up perfectly. Sorry I have no pictures. One day, I’ll be better at the whole picture thing.